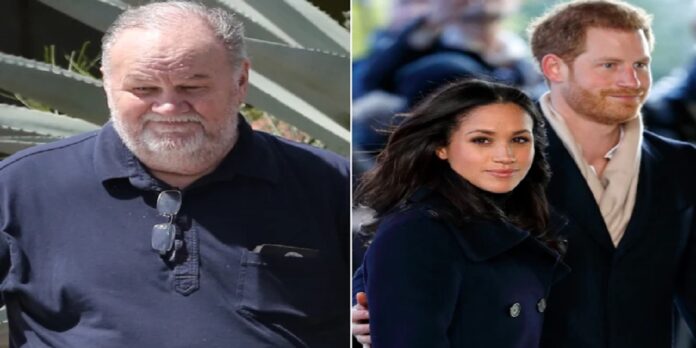 Meghan Markle’s dad has bragged about his plans to continue cashing in on her, saying “the royals owe me” — and telling his daughter, “It’s time to look after Daddy.”

Thomas Markle, 75, admitted on an upcoming UK documentary that he is still making money off photos he staged with a paparazzo, even though they humiliated his daughter just days before her 2018 royal wedding — and that he lied to Prince Harry about his involvement.

“Absolutely. Those pictures will sell forever,” he told the doc, “Thomas Markle: My Story,” according to clips shared with the Mirror.

Now the estranged dad — who has never met his royal grandson, Archie — has no qualms about demanding cash for interviews, including the one he was giving for the Channel 5 documentary, the report says.

“I’m going to defend myself and I’m going to be paid for it. I don’t care,” he told the Channel 5 documentary, the Mirror said.

“At this point, they owe me. The royals owe me. Harry owes me, Meghan owes me. What I’ve been through I should be rewarded for.”

He said Meghan had always told him she would “take care of me” when he got older.

“I’m in my senior years now — it’s time to look after Daddy,” he reportedly told the documentary team.

The staged paparazzi pics taken in the run-up to the royal wedding showed Thomas running up a hill lifting weights, reading a book titled “Images of Britain” and getting measured for a wedding suit.

He said they were his response to the media painting him as a “dumb, fat slob.”

“I got approached by a guy who spoke to me and said, ‘I can change your image,’” he recalled, saying the pap told him he could make him “look respectable.”

“The idea was that these would all be candid shots, discreet, no one would know they were posed or anything,” he said, admitting to instant doubts that the shots looked “hammy.”

“But he keeps saying, ‘You’ve got to trust me. I’ve done this a hundred times,’” he said.

He admits that he lied to his daughter and then-husband-to-be Prince Harry when they called after being alerted to the impending publication.

Markle eventually skipped his daughter’s royal wedding, insisting it was because of a “massive heart attack” that doctors warned could kill him if he flew to London. He shared medical notes with the documentary that he says prove his claims.

Still, Thomas felt like he was the victim when his daughter wrote him a letter about the pain his no-show caused her — one he later shared with the British paper the Daily Mail.

He says he only did that after Meghan’s friends banded together to attack him in a separate story, according to the Mirror.

“They dissed me, calling me a liar,” he said — in the same interview where he had just admitted lying.

“Now it’s become an organized defamation of me,” he said. “So I felt I had to defend myself, so I published part of the letter.”

The dad admits that things are now so bad, he assumes he will never see his daughter again before he is “lowered into the ground.”

“I don’t think at this point they are thrilled to see me or want to talk to me.”

Despite admitting lying and making money off the staged photos, Thomas insisted he was speaking out to the doc to prove he is “not all the trashy things” being said about him.

Meghan Markle’s father, Thomas, admits to lying on his … but insists ‘royals...

NEWS Natasha Roy - March 27, 2022 0
Meghan Markle’s dad has bragged about his plans to continue cashing in on her, saying “the royals owe me” — and telling his daughter,...

SERENA WILLIAMS SAYS SHE DOESN’T KNOW WHEN SHE WILL RETIRE FROM TENNIS AND IS...

SPORTS Natasha Roy - March 24, 2022 0
Serena Williams says she doesn't know when she will retire from tennis and is just "living for the day" as she balances her sporting...